As I prayed and asked the Lord what He would like me to share with you today, the words of our Old Testament reading (Job 33:13-15) immediately came to mind, and inspired this morning's service.   "For God speaks again and again, though people do not recognize it. He speaks in dreams, in visions of the night..."

God has spoken to His people in many different ways.  Some have heard His audible voice.  Others saw signs in the heavens.  And throughout history he has used dreams and visions to relay important messages to His people.

For instance, God used dreams and visions in the Old Testament to reveal His plan, to further His plan, and to put His people in places of influence.  God used a vision to restate the Abrahamic Covenant, reminding Abram that he would have a son and be the father of many nations. (Genesis 15:1).  Abraham's wife, Sarah, was beautiful - so beautiful that when Abraham came into a new area he occasionally feared that the local ruler would kill him and take Sarah for himself. So Abraham told the king that Sarah was his sister (she was his half-sister). The king took Sarah into his harem, but God sent him a dream telling him not to touch Sarah because she was Abraham's wife. The king returned Sarah to her husband the next morning; the dream had protected Sarah and safeguarded God's plan for Sarah to be the mother of His chosen people (Genesis 20:1-7). Jacob, with his mother's help, stole Esau's firstborn inheritance. Jacob then fled Esau's anger, and on his journey he had his famous dream of a ladder reaching to heaven on which angels ascended and descended. In this dream Jacob received God's promise that Abraham's blessing would be carried on through him (Genesis 28:10-17).  Joseph is one of the most famous dreamers, and one of the most famous dream-interpreters, in the Bible. His first recorded dreams are found in Genesis 37. They showed through easily deciphered symbols that Joseph's family would one day bow to him in respect. His brothers didn't appreciate the dream and in their hatred sold Joseph into slavery. Eventually, Joseph ended up in prison in Egypt (Genesis 37:1-11). While in prison Joseph interpreted some dreams of Pharaoh's cupbearer and baker. With God's guidance, he explained that the cupbearer would return to Pharaoh's service, but the baker would be killed (Genesis 40).  This indeed happened. Two years later, Pharaoh himself had a dream which Joseph interpreted. God's purpose was to raise Joseph to second-in-command over Egypt and to save the Egyptians and the Israelites from a horrible famine (Genesis 41).  Samuel had his first vision as a young boy. God told him that judgment was coming upon the sons of Samuel's mentor, Eli. The young Samuel was faithful to relay the information, and God continued to speak to Samuel through the rest of his life (1 Samuel 3). The pagan enemies of Israel had a divinely inspired dream. God told Gideon to sneak into the enemy camp at night, and there in the outposts of the camp, Gideon overheard an enemy soldier relate a dream he had just had. The interpretation, from another enemy soldier, mentioned Gideon by name and predicted that Israel would win the battle. Gideon was greatly encouraged by this revelation (Judges 7:12-15). It was in a dream that God gave Solomon the famous offer: "Ask what you wish Me to give you." Solomon chose wisdom (1 Kings 3:5). As He had done for Joseph, God placed Daniel in a position of power and influence by allowing him to interpret a foreign ruler's dream. This is consistent with God's propensity to use miracles to identify His messengers. Daniel himself had many dreams and visions, mostly related to future kingdoms of the world and the nation of Israel (Daniel 2-4).

In the New Testament God used visions and dreams to identify Jesus and to establish His church. God used a vision to tell Zacharias, an old priest, that he would soon have an important son. Not long after, Zacharias and his wife, Elizabeth, had John the Baptist (Luke 1:5-23). Joseph would have divorced Mary when he found out she was pregnant, but God sent an angel to him in a dream, convincing him that the pregnancy was of God. Joseph went ahead with the marriage. After Jesus was born, God sent two more dreams, one to tell Joseph to take his family to Egypt so Herod could not kill Jesus and another to tell him Herod was dead and that he could return home (Matthew 1:20; 2:13). During Jesus' trial, Pilate's wife sent an urgent message to the governor encouraging him to free Jesus. Her message was prompted by a dream she had - a nightmare, really - that convinced her that Jesus was innocent and that Pilate should have nothing to do with His case (Matthew 27:19). It would have taken nothing less than a vision from God to convince Ananias, a Christian in Damascus, to visit Paul, the persecutor of Christians. But because Ananias was obedient to God's leading, Paul regained his sight and found the truth about those he was trying to kill (Acts 9:10). God spoke to an Italian centurion named Cornelius who feared the God of the Jews. In his vision, Cornelius saw an angel who told him where to find Simon Peter and to send for him and listen to his message. Cornelius obeyed the vision, Peter came and preached, and Cornelius and his household full of Gentiles were saved by the grace of God (Acts 10:1-6). While Peter was praying on the rooftop of a house in Joppa, God gave him a vision of animals lowered in something like a sheet. A voice from heaven told Peter to kill the animals (some of which were unclean) and eat them. The vision served to show that Christians are not bound by kosher law and that God had pronounced Gentiles "clean"; that is, heaven is open to all who follow Jesus (Acts 10:9-15). Paul had several visions in his missionary career. One sent him to preach in Macedonia (Acts 16:9-10). Another encouraged him to keep preaching in Corinth (Acts 18:9-11). God also gave him a vision of heaven (2 Corinthians 12:1-6). And, of course, nearly the entire book of Revelation is a vision John had while exiled on the island of Patmos. John's vision explains in more detail some of the events that God had shown Daniel.

(Examples gathered from GotQuestions.org - a good site to go to with Biblical questions)

The big question is... does God still speak to us through dreams and visions today?  There are some Christians that say 'yes' and some that say 'no', so who do you believe?  Personally, as I believe is so often the case in situations where people tend to veer to the extreme left or extreme right, the answer lies somewhere in the middle.  While dreams and visions served distinct purposes in the Old Testament and the New Testament, and contributed greatly to the writing of the Holy Scriptures, which should now be our primary guide (and I cannot empathize that enough); that does not mean they have ceased entirely.  But we must be very cautious, as satan often sends dreams and visions as well, in an effort to deceive, lead people away from the truth, and inspire fear, hate, and every other negative emotion.  In past centuries there have been many dreams and visions that have resulted in false religions and cults, which have caused many, many souls - and lives - to be lost.  So my advice if you have a dream and are wondering if it was sent from God, is this:  Give it a three-fold test.  First, is there anything in the dream that contradicts what is in Scripture?  God will NEVER lead you to believe what goes against his Holy Word.  Secondly, does it contradict what the Holy Spirit is telling you?  If the Holy Spirit has ushered a warning, but the dream suggests all is well, you might think the dream is from God and the warning from the devil, just because the dream is more comforting.  Remember how God scolded the false prophets in Jeremiah's day, when He said, "From prophets to priests, they are all frauds. They offer superficial treatments for my people's mortal wound. They give assurances of peace when there is no peace." (Jeremiah 6:13b,14).  And today there are many who are indeed profiting off people's desire to hear only good news, and who reject God's warnings about sin, about hell, and about judgment.  And third, if the dream is confusing, and you fear misinterpretation, ask God to interpret the dream.  He might show you directly what it means, or he might send someone across your path that can interpret it for you (as Joseph and Daniel did).  But again, be cautious, that you only listen to God's voice.  You must always pray for discernment.  But if your dream is indeed from the Lord, then by all means pay attention.  Whatever He is telling you was important enough for Him to send it to you in a direct manner.

And on that note, let me close by sharing a personal example.  I would not be standing here, sharing this message with you, if it were not for a dream.  After I had come here to worship a couple of times, and was still undecided if this was where God wanted me to serve Him, I had a dream.  It was the year I was training for a half-marathon, and would run past a sheep farm on the canal trail close to Marseilles.  There was a big white sheepdog that would often run out to meet me.  In my dream I saw this particular dog, with an Indian crouched beside him, his arm around him, looking at me very intently.  Feeling this was a message, I prayed for interpretation, and the Lord told me that the Indian represented Pastor Mark and the sheepdog symbolized him as my spiritual shepherd.  It was then that I knew my future lied here.   Amen. 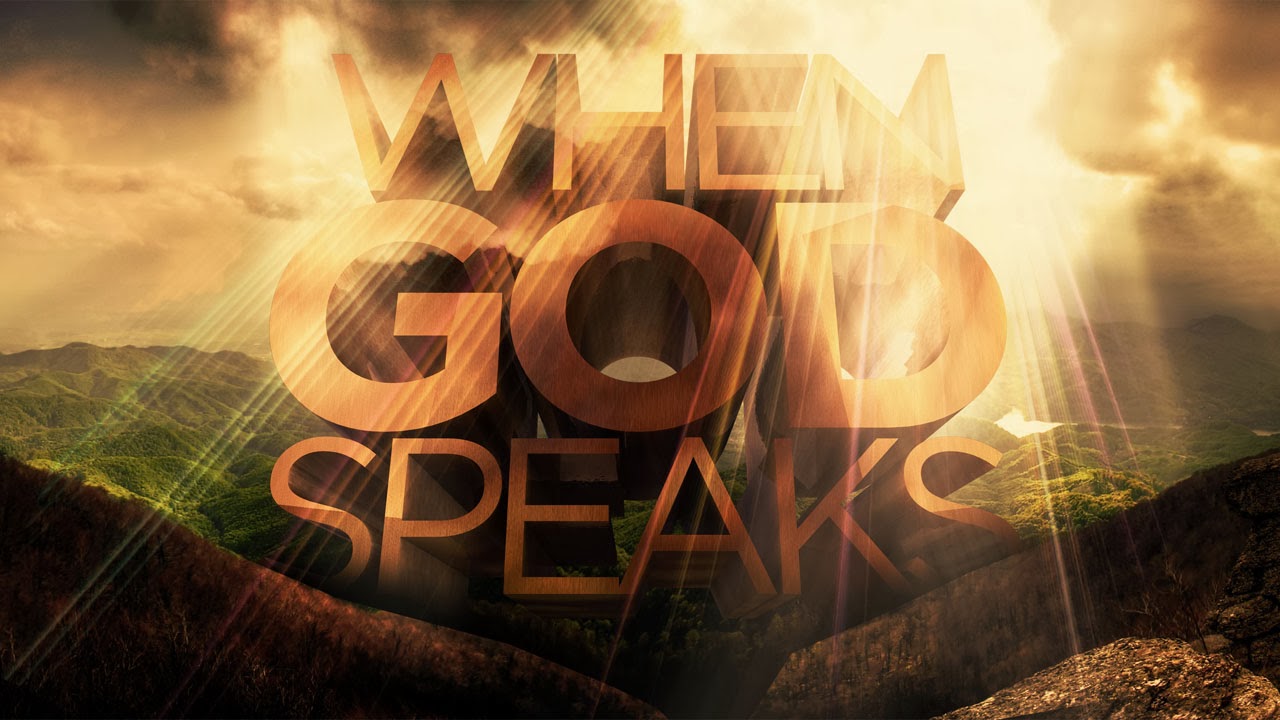