Today is Pentecost Sunday. It isn't a big holiday like Christmas and Easter, that is celebrated by Christians and non-Christians alike.  We don't exchange gifts, send cards, or put up decorations.  Most Christians need a greater understanding of its place in the Biblical timeline to fully appreciate what happened on that day, why it happened on that day, and what it means in reference to both our history and our future.

As you heard in our epistle reading (Acts 2:1-7, 11b-12), Pentecost was the day when the Holy Spirit of God came down to indwell 120 followers of Jesus, and they started speaking in foreign languages. This created such a commotion that thousands who were in Jerusalem at the time came out to see what was happening; and in front of the gathering crowd, Peter spoke the first gospel message. '3000 were added to their number that day!' (Acts 2:41). And the number of Christians has been growing continually ever since that day.

But do you know WHY it happened exactly 50 days after Christ's resurrection?

From the Old Covenant to the New, Genesis to Revelation, God provides picture after picture of His entire plan for mankind and one of the most startling prophetic pictures is outlined for us in the Jewish feasts of Leviticus 23.  The Hebrew word for "feasts" (moadim) literally means "appointed times".  In Leviticus 23, God ordered the Jews to celebrate seven specific feasts - 4 in the Spring and 3 in the Fall.  The festival of Passover was the first to be celebrated in the Jewish year, in memory of how the angel of death passed over them if they had the blood of a lamb on their doorposts.  Jesus, the Lamb of God, was sacrificed on the same day that all Jewish people were sacrificing their lambs in memory of that first Passover. Given that there are 365 days in a year it is no coincidence that Jesus died on that very day. 1500 years after the first Passover, Christ became the final Passover lamb.  For the Old Testament has always been a foreshadow of the New.

Then Christ was buried during the second feast, that of Unleavened Bread.  This feast pointed to Jesus' sinless life (as leaven is a picture of sin in the Bible), making Him the perfect sacrifice for our sins. Jesus' body was in the grave during the first days of this feast, like a kernel of wheat planted and waiting to burst forth as the bread of life.

The third Old Testament feast is the Feast of Firstfruits, which pointed to the Messiah's resurrection as the first fruits of the righteous. And again note that Jesus was resurrected on this very day, which is one of the reasons that Paul refers to him in 1 Corinthians 15:20 as the "first fruits from the dead".

Which brings us to the fourth feast...  Exactly 50 days after Passover the Jews celebrated the Festival of Weeks or Pentecost. And they had been doing so yearly for 1500 years by the time the events of Acts 2 happened. In fact, the reason that there were people from all languages who were in Jerusalem that day to hear Peter's message was precisely because they were there to celebrate the Old Testament Pentecost.

This is significant on several counts. First of all, one of the reasons that the Gospel is 'good news' is that not only is it about a conquering of death, but it is also about living life differently. Life is now a union between God and people. And this union takes place through the indwelling of the Spirit of God “ which began on the Pentecost Sunday of Acts 2. The Good News is that life can now be lived on a different level, in a relationship with God through His Spirit. Paul puts it like this: "Not only so, but we ourselves, who have the firstfruits of the Spirit, groan inwardly as we wait eagerly for our adoption to sonship, the redemption of our bodies." (Romans 8:23)

The indwelling Spirit of God is a 'firstfruits' of the Gospel, intimately tied in with the resurrection because the Spirit is a firstfruits - a deposit so to speak - of our coming personal resurrection.

And once again the timing is no coincidence.  Given that there are 365 days in a year and the events in Acts 2 happened exactly on the Feast of Pentecost, the day when the Jews celebrated 'firstfruits' of the grain and oil of the land - the things that give not just life, but an abundant life - shows that God had it all planned from the beginning.

Now, before we conclude this message on Pentecost, remember I said there are 7 feasts God established in the Old Testament book of Leviticus 3500 years ago.   You just heard how the first four were fulfilled in the New Testament through the death and resurrection of Jesus Christ and the coming of the Holy Spirit at Pentecost.  What about the remaining three?

Here is what my favorite evangelist, Perry Stone (who has done intensive study on the correlation between the Old and New Testaments), says of the fifth feast: "On the Jewish calendar, the next major feast that follows Pentecost is Rosh Hashanah, or the Feast of Trumpets.  This feast is one that many prophetic scholars believe might coincide with the sounding of the trumpet when the dead in Christ will rise (1 Thessalonians 4:16).  On the Hebrew calendar there is a four-month gap between Pentecost and the Feast of Trumpets.  Those four months are the hot, dry summer season where there is almost no rain at all.  In Israel rain comes in cycles that repeat yearly, not on the same day but in the same season under normal weather patterns called the early and letter rains.  From a prophetic perspective, the early rains are the outpouring recorded in Acts 2:1-4, which gave rise to the Christian church on the Day of Pentecost.  The latter rain is an outpouring that has dropped spiritual rain from time to time in selected areas of the nation and the world.  However, there is coming a global covering of the refreshing from heaven, that will impact all nations and all flesh.  This outpouring is a sign of the soon return of Christ."  (page 242, "Deciphering End-Time Prophetic Codes" by Perry Stone)

So as we anxiously await the Feast of Trumpets, may we be among those to receive this outpouring of the Holy Spirit, the latter rain, just as the first disciples received the early rain on almost 2000 years ago.  Amen.

Cole liked the fan I used to demonstrate the 'wind' that blew when the Holy Spirit arrived on Pentecost... 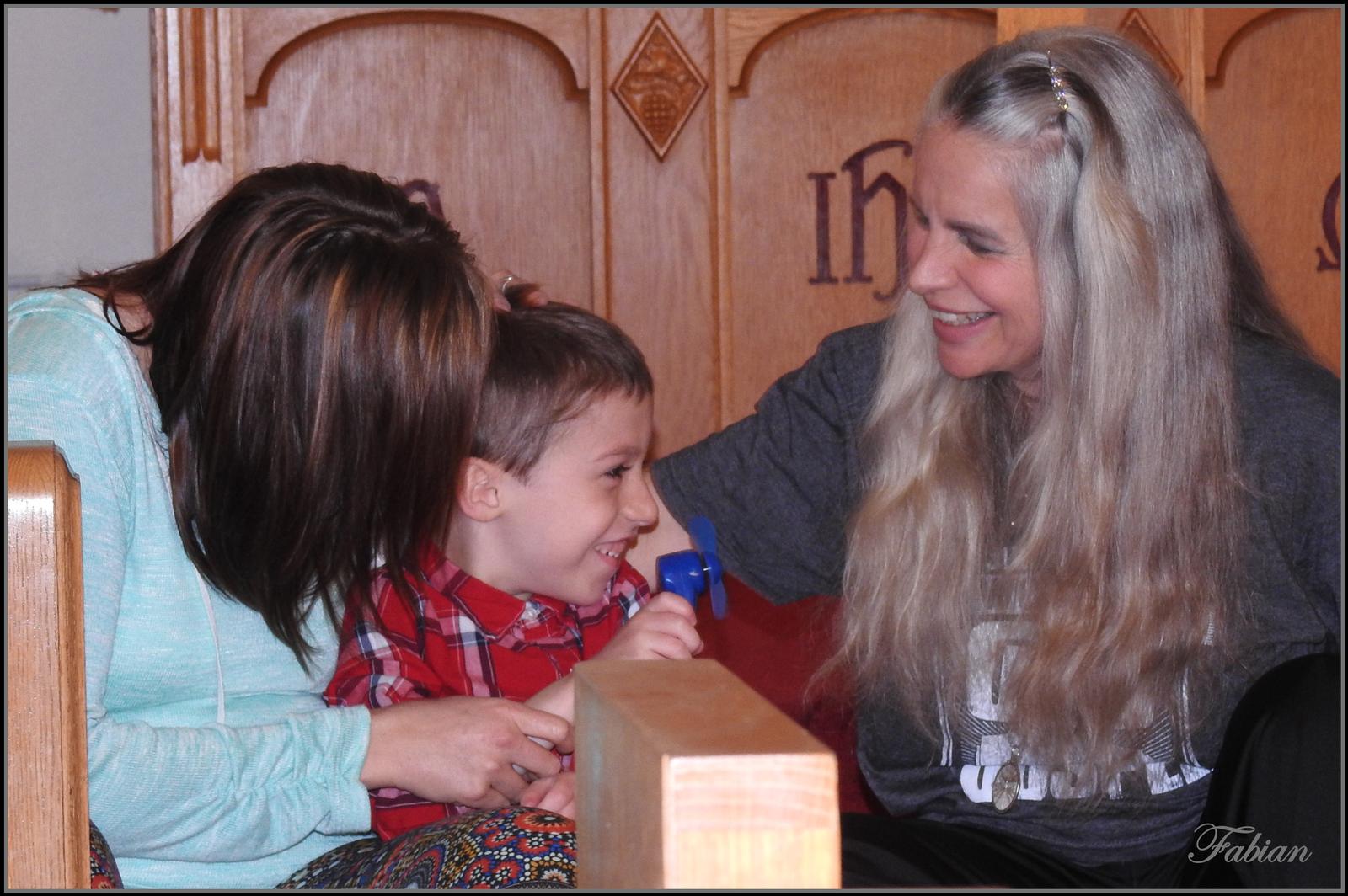